Hospitals warn patients: Your Lululemon yoga pants could burn you during MRIs – MarketWatch You already know that wearing yoga pants can help you burn fat, if you do the work. What you may not know: They can also burn your skin.

Patients across the country are being told to ditch their stretch clothing in favor of paper gowns or cotton T-shirts before undergoing an MRI (magnetic resonance imaging). Stony Brook University’s hospitals in New York, the University of California, Los Angeles and Mount Sinai in New York are just a few of the major institutions that have introduced this policy in recent years. 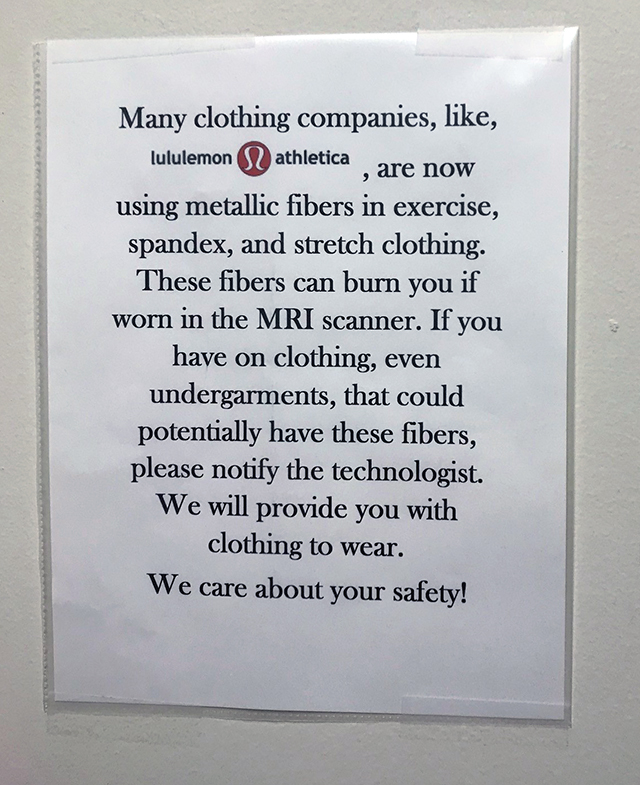 These tiny metal threads keep odor and bacteria from building up in clothes as people do their downward dog pose. Hospitals, on the other hand, want to prevent the smell of burning. Warning signs—some mentioning the popular yoga clothing brand Lululemon Athletica—are plastered in radiologist offices across the country. “These fibers can burn you if worn in the MRI scanner,” one reads.

Radiologists say patients are often taken by surprise when they’re asked to change out of their stretch clothing into something far more comfortable (and safe). “I suspect many patients are unaware of the clothing risks,” said Bradley Delman, an associate professor of radiology at Mount Sinai. “Even very comfortable clothing can present unnecessary risks. Safety must come first.”

If more patients were aware of the risks, they’d leave their yoga pants at home. Patients can get burned because of a process similar to what happens during magnetic induction cooking, said Haifang Li, an image scientist in the radiology department at the Stony Brook School of Medicine in New York. Even metal fibers in underwear can burn the patient’s skin, Li said.

Radiologists have long told patients that they shouldn’t wear any metallic clothing or jewelry, but more have banned athleisure within the last five years. In fact, UCLA’s medical facility specifically prohibited clothing brands including Lululemon

A selection of Lululemon’s products are created with “Silverescent” technology, a fabric that incorporates silver-bonded threads to inhibit the growth of odor-causing bacteria on the garment, a company spokesperson said. Consumers wondering whether their athleisure contains silver microfibers can check the product’s labels or look up the product online.

Unfortunately, one 11-year-old girl found out the hard way. Her case was published in 2012 in the American Journal of Neuroradiology. She was sedated during an MRI for scoliosis, but when she woke up, she said she felt burning on her skin. She received a second-degree burn, which the researchers determined came from her undershirt reacting with the MRI machine.

The shirt had silver microfibers that weren’t detected before the test with a wand metal detector. In this case, the shirt’s label did not mention the presence of silver microfibers, the study said. The authors said this was possibly the first reported case of MRI-related burns associated with clothing containing invisible silver microfibers.

“Among the injuries sustained during [magnetic resonance] imaging examination are numerous cases of thermal burns,” the researchers wrote. “Because of normal MRI heating effects and safety constraints, patients are encouraged to change into hospital garments or wear loose-fitting non-metal-containing clothing for their examinations.”

The girl’s shirt, which she had been wearing under a back brace, was from the National Orthotics and Prosthetics Company store in Boston, Mass. Staff at the store said they were made aware of that incident and the company’s chief executive, Thomas Morrissey, said it was a “one-of-a kind incident that had never occurred before, and hasn’t since.”

Since that incident, the company has added more product details to labels and introduced new fabrics, Morrissey said. Today, only 35% of sales of the shirt style worn by the girl in the MRI machine contain silver microfibers, he said.

Omni-Heat Reflective line uses an aluminum foil in its fabric, a company spokesman said. That’s the only Columbia clothing line that has any metallic fibers. Those fibers are actually visible and “quite shiny and obvious,” he said. (Athleta, a women’s athletic clothing company based in San Francisco, did not respond to a request for comment.)

Lululemon was cited in a 2014 case, when another woman, Jenn Marr, felt a burning sensation during an MRI while wearing the company’s yoga pants. Marr was not sedated during the procedure and after 15 minutes alerted the radiologist. The machine was turned off and Marr was not seriously harmed. “I was getting a burning sensation so strong that I had to press the emergency button for them to stop the machine and pull me out,” she told GlobalNews, a Canadian news site.

What happens to these silver threads during an MRI?

Medical professionals ask patients to remove all metal from their bodies because MRI machines use electromagnetism and radio waves—effectively turning them into a powerful magnet, according to the American Society of Neuroradiology (ASN). The waves are so powerful that they can cause some metals to move, which is why they may not be safe for people with cardiac pacemakers and metallic implants.

And it’s not just yoga pants that lead to burning during MRIs. Some tattoos can burn the skin in an MRI machine, according to researchers at Washington University in St. Louis, Mo. Certain tattoo pigments have metallic compounds that react badly in the MRI. Especially risky tattoos are ones that have black pigment or any other pigments containing iron oxide, the researchers noted.

A 48-year-old man was burned in an MRI machine simply because his thighs were pressed closely together, according to the Cleveland Clinic Journal of Medicine. When skin is touching skin, it can cause the MRI to emit high-powered electromagnetic radiofrequency pulses. Another unexpected culprit: Nicotine patches, which can trap water against the skin and burn a patient during an MRI.

How can you tell if your clothing has metal fibers?

Other signs of metallic fibers: Clothing that says “anti-microbial” or “anti-bacterial” in the label should be avoided, because it uses “silver technology,” which contains metal, said Alison Matthews David, an assistant professor at Ryerson University in Toronto, who studies how clothing can impact health.

One problem for consumers: So many athletic lines use their own terms for their fabrics, it’s almost impossible for consumers to keep up with all the types available, David said. “Unless you’re a really careful consumer, you might not know what’s in your clothes,” she said.

And often, the metal materials in the clothing aren’t visible, especially as technology has improved, she said. So there may be no indication that the fabric contains metal. “Wear your good, old-fashioned T-shirt and sweatpants if you still want to be comfortable,” she said.

This isn’t the first time scientists have said athletic clothing is harmful. Clothing that is made from synthetic materials—which includes many athletic lines—is more harmful to the environment than natural fibers, because they aren’t biodegradable. When consumers wash the clothing, small fibers come loose and end up in the air and in waterways, environmental experts say.

We Want to
Hear from You