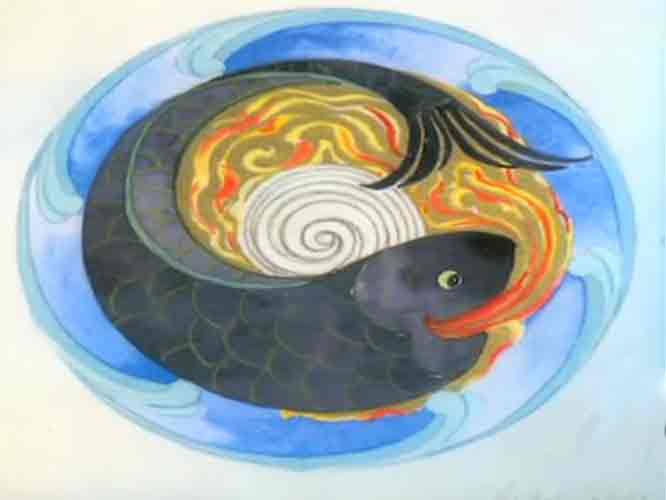 THE SACRED ROUND: Mandalas by the Patients of Carl Jung
February 5-May 6, 2012

“The Sacred Round: Mandalas by the Patients of Carl Jung,” the first-ever exhibition of forty mandalas created by patients of Swiss psychoanalyst C.G. Jung, will be showcased at the Oglethorpe University Museum of Art from February 5 through May 6, 2012. The exhibition is courtesy of the C.G. Jung Institute in Kusnacht, Switzerland. The Sacred Round features multiple works created by five patients during the course of their treatment between 1926 and 1945, offering rare insight into the patients’ creative analytical process and the symbolism within their mandalas. Among the exhibited works is a handmade  book containing one patient’s dream descriptions and drawings, hailed as the feminine version of The Red Book, Jung’s famous manuscript only recently made available.

Mandalas, meaning “circles” or “holy circles” in Sanskrit, were used during therapy to express both the conscious and unconscious. The use of mandalas in therapy was a result of Jung’s own self-experimentation with mandalas between 1913 and 1917, documented in The Red Book. The Sacred Round is curated by Vicente de Moura, archivist at the C. G. Jung Institute and a Jungian analyst. Assistant curators are Dr. Jutta von Buchholtz, a Jungian analyst from Birmingham, Alabama, and Lloyd Nick, director of the Oglethorpe University Museum of Art. “Jung realized through his own paintings that balance is possible when one gets out of the opposites and focuses in the middle. Intuitively Jung drew mandalas, which led him to a center,” explained Curator Vicente de Moura. “Later he observed that the symbol had a similar meaning for his patients.”  “Since I first visited the Jung Institute in Zurich, I have worked to bring these mandalas to Oglethorpe University and Atlanta,” said OUMA Director Lloyd Nick. “This is an exceptional opportunity to view symbolic and historic art that has been secured in the Institute’s archives for decades.”     (From Oglethorp University Museum:)

“The Sacred Round: Mandalas by the Patients of Carl Jung” is the first public exhibition of its kind. Given the historic nature of the show and the provocative questions it poses, we are running two commentaries. Jack Wieland, a training candidate with the Jungian Psychoanalytic Association in New York and an art historian, offers his perspective today.

“The Sacred Round, Ogelthorpe’s University Museum’s exhibition of images, largely mandalas, painted by renowned Swiss psychiatrist Carl Jung’s patients, offers a glimpse of something even more intriguing than what hangs on the museum’s walls: the mystery of psyche itself.

The patients’ work, generated during and after their analyses, depicts their encounters with the unconscious. What emerges are mandalas that flower and contain. These images stand as expressions of psyche, but also psychic process, the evolution of the personality toward greater wholeness, which Jung described as “individuation.”

The images are remarkable: vivid, often intricately worked and painted with great care. One is embroidered. The attention paid by these patients to their inner worlds seems enormous.

There are repeating motifs: snakes, eggs, fish, the sun and moon and Jung’s favorite pairing, the syzygy. For Jung, the ubiquity of these symbols, like the mandala itself, proved something. The fact that these images surfaced in so many patients’ material, and similarly in the myths of so many peoples removed from one another in place and time, convinced him that they were images of archetypes, transpersonal structures that inhabit the collective unconscious. His encounter with mandala imagery supported his theory.

Needless to say, a tension between psychological process and aesthetic striving hovers in the air. Unfortunately, it remains largely unaddressed. Even though a majority of these images are published and well known to Jungians, one wonders whether psychological scrutiny should ever be replaced by a museum’s gaze.

Setting such questions aside, there are creative moments here that feel familiar. One snake pushes up against the edges of the paper like a line from Brice Marden’s “Cold Mountain” series; arms present like Egon Schiele’s; a certain orb could have drifted in from an Arthur Dove landscape. William Blake’s fantasy haze permeates a few drawings, and this raises the issue of context.

Style isn’t always personal; often it, too, is collective. How finished did work have to be to be presented to Dr. Jung? Did patients do preparatory studies? How mediated were these unconscious encounters? How did Jung choose to keep paintings (the catalog notes that he encouraged analysands to make two, one to give and one to retain), and how did this analytic move affect the transference with these patients? Were patients aware of fellow analysands’ work?

To the extent that Oglethorpe’s exhibition contextualizes, it takes a different approach. A prominently placed Amitabha Buddha from Japan makes clear the Eastern connection. Jung did greatly admire the wisdom of the East, especially in his study of the Golden Flower, but this accentuation travels a well-worn path that leans too heavily on the esoteric and not sufficiently on the personal. For in the end, no matter how archetypal, these images are representations of personal process, attempts to make meaning out of life and the most challenging personal dilemmas.

Kristine Mann, the important first-generation Jung follower and translator who did much to bring his psychology to New York, painted two of the most affecting images in the show. One, done on her return from Zurich, pictures a mandala floating above Fifth Avenue. In another — her last, made during her treatment for breast cancer — a mandala hovers just barely above the floor of a darkened pit.

With these mandalas, the inner world meets outer lived experience, and the confrontation is palpable. The integrity and commitment necessary to hold these two realities, quintessential to analytic work, could not be more real.

Jung warned of the danger of aestheticizing images from the unconscious. It is fair to wonder whether that danger exists in both these mandalas and this exhibition. Wall texts written by a variety of psychoanalysts, which discuss concepts fundamental to Jung’s psychology — libido theory, symbolic thinking, alchemy — aim to keep that danger in check. But with this approach, the opposite pitfall presents itself: interpretation can too quickly reduce the numinous.

“Sacred Round,” perhaps more than it intends, ushers viewers not only into a world of psyche but also into the challenges and rewards of any attempt to attend to it, to make meaning of it for life.

A well-produced exhibition catalog provides thoughtful essays that paint a more complete picture of Jung’s use of mandalas and the zeitgeist in which they were made. A lecture series, with talks by Jungian analysts practicing in Atlanta, accompanies the show, which closes May 6.