Passion for Pilates Leads to New St. Joe Studio from a Buchanan Native If you look into the very core of any successful small business, inevitably you will find a deep passion. It’s the passion for her own core that led to the opening of St. Joseph Pilates by Megan Smedley.

Originally from Buchanan, Megan launched her new Pilates, Yoga and Barre Studio in the Uptown Building where Main Street and Niles split in St. Joseph to capitalize on her talents as a fitness instructor.

The newly revamped 2,400 square foot studio allows Megan’s passion to become your own passion for developing your core strength, balance and beyond. She’s been teaching yoga for more than a decade now, and says, “I was interested in Pilates, but didn’t know much about it, so I was looking into it and fell in love with it.” As a former high school track star, Megan tells us, “What yoga gave me was balance and strength, but then it was increased substantially when I learned how to use the Pilates reformer so I got even deeper core strength, more flexibility, and better balance even from just using the reformer, so I was just hooked from the first time that I tried it.”

The reformer she refers to is her base of operations at St. Joseph Pilates. She has six Balanced Body Allegro II Reformers in the house. She says the reformer makes all the difference, suggesting the concentration involved is different. Megan says in regular exercise, “You can get distracted easily, I think.” She adds, “Thinking about a lot of exercises, this is different, and while we’re doing so few repetitions you really have to stay focused the entire time in order to keep everything connected, and form full engagement in order to really complete the exercise effectively.”

Megan says, “The reformer allows for a very slow and controlled exercise, very mindful, and its for building deep core muscles.”

By way of explanation, Megan says, “If you’re looking for an exercise that’s gentle yet challenging and works your core like no other, consider Pilates. Joseph Pilates, a German boxer who immigrated to the United States in the 1920s, created the fitness method.”

Pilates uses controlled movements that strengthen deep core muscles in your entire torso.  It combines exercises with a special breathing technique and concentration, so it connects the mind and body, and can help relieve stress and anxiety.  It can be done on the floor using a mat and your own body weight as resistance or on a Pilates Reformer. “Floor or Mat Pilates” follows a sequence of moves that flows like a dance; in fact, dancers were the first group to embrace the activity for the performance benefits it gave them.  Other exercises involve special equipment developed by Pilates himself, with springs and pulleys to create the resistance. Best known is the unusual looking bench called the Reformer. The tension can be adjusted, so “Reformer Pilates” is good for both beginners and advanced enthusiasts.  Saint Joseph Pilates offers not only both styles of Pilates, but Power Vinyasa Yoga, Yin Yoga, Barre classes and private sessions.

St. Joseph Pilates offers regular classes, one of which is an intermediate class, and will add more as soon as more people are coming. Most of the classes are for beginners, but Megan also offers private sessions in the afternoon, for anyone at any level, for those who are looking to get into a closer relationship with the reformer. Megan says, “You will do the exercises more quickly with one-on-one, hands-on training.”

She says, “I coupled the two, for a physical practice as well as the talk therapy and that’s what got me interested in yoga. Then I moved back to the area and started teaching at the University of Notre Dame in their key enrollments department, and I was teaching yoga there and that’s when I started getting more into Pilates, but that department was cut and after being a mental health therapist in South Bend I decided that I was looking for something a little different.”

She started working in Buchanan, just doing private lessons on one reformer, and says, “It was amazing, but I thought I could really provide it to more people so wanted to open up a small business, and St. Joe was the perfect opportunity with a population large enough to support a business of this size, and it just seemed like the right spot for me and I wanted to explore the area.”

Megan admits her avocation is definitely a passion, saying, “I think people are so disconnected from their physical body these days that we all need something more and to feel good in our bodies once again — to make that mind-body connection so that they can do everything better. In Pilates that is the basis or principle – to make you feel better in your body doing everything else in your life. You could do this twice a week and that’s all you need to just make every exercise or daily activity feel good again.” 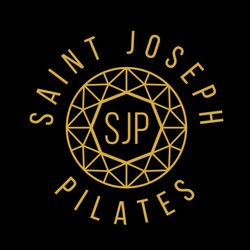 At St. Joseph Pilates, Megan teaches a 15-minute class and the repetitions sometimes depend on which exercise, but she says, “Sometimes you can do as few as three and it could be as much as 12 reps per exercise, depending on what we’re doing. It’s very mindful, it’s very slow, and it’s based on spring tension which is the way that the reformer weight, but also the body weight, is used to create the resistance for the exercise.” If you’re wondering, Megan says, “It’s very low impact, it’s getting your body stretching or elongating your muscles, and to deepen that core strength. I would say for anyone just coming in as a beginner or even if they are advanced, you can probably do between 6 and  12 different exercises in that 15 minutes.”

At the studio she also sells“sticky socks” good for keeping your feet warm but also providing good traction for the reformer, and to keep sweaty feet from causing you to slide when you don’t want to, keeping you secure on the reformer. The studio also offers a small cache of other things like St Joe Pilates t-shirts and accessories..

This spring she’ll have another grand opening party on a larger scale than the soft opening affair that was held when first setting up shop. Sadly, due to the weather her third week open she ended up being closed most of the week due to the Polar Vortex.

There are different bases of commitment at St. Joe Pilates, with Megan explaining, “We feel that in 10 sessions you will feel the difference, 20 sessions you’ll see a difference and in 30 you’ll have a whole new body. So, I have a 30 session challenge which you have 105 days to complete, and hopefully see that huge difference in that amount of time, but to really see an eventual difference you need to come at least once or twice a week for sure.” However, commitment levels vary and there are different price points that you can choose from. A membership is a three month commitment, and they can do other packages as well with less of a commitment but still an incentive to come in and use those sessions.

While women are the predominant users of the Pilates systems and head to the studio, Megan says, “I have a nice handful of men that are actually joining the gym as well, and they’re using it to improve their golf game, to improve their tennis game, for shoulder and hip mobility, so we can help improve anyone’s need for increased flexibility and mobility. We have cross fit fans coming in to develop their core strength so they can be stronger in their Olympic lifts. It’s for everyone.”

Most people are unfamiliar with Pilates, but it is one of the fastest growing exercises in the world. And millions more have experienced the physical fitness benefits of added strength, length, and agility that it provides.  However, few know that Pilates is rapidly rising in another area – rehabilitation from injury.

Megan says, “Many injuries are caused by muscular imbalances within the body. And many things cause those imbalances – our posture, the way we walk, bend over, sit, lie down, or work out; basically the way we move or forget to move. Most of us move incorrectly in some way or another, which puts too much pressure on some muscles and weakens others, causing an imbalance. Pilates exercises promote an even musculature throughout the body by strengthening the core. The core is considered the “center” of the body and consists of the deep abdominal muscles along with the muscles closest to the spine. Pilates also stresses spinal and pelvic alignment, which is critical in getting us to move the way we’re supposed to move to avoid injury.”

You can find St. Joseph Pilates at 1051 Main Street in St. Joseph with entrances off of both Main Street and Niles Avenue. You can reach the studio by phone at 269-588-3001 and learn more online by clicking the link below: