—THE SIXTH CHAKRA: THE FIRST OF THE SKY CHAKRAS —THE SIXTH CHAKRA: THE FIRST OF THE SKY CHAKRAS

Posted at 09:00h in Shamanism by Dr. Alberto Villoldo 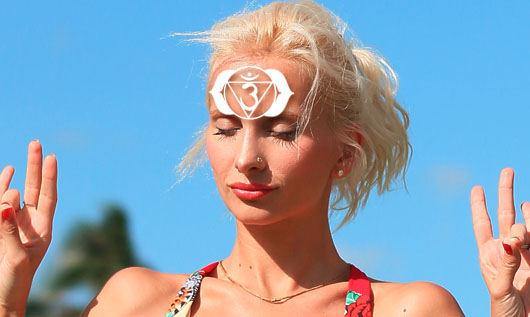 The sixth, seventh, eighth, and ninth chakras are known as Sky Chakras. They are supported by the Earth Chakras, just as the branches of a tree are supported by its trunk and roots. Through the Sky Chakras we explore increasingly subtle domains and enter into less familiar territory.

The sixth chakra, or third eye, is located in the middle of the forehead. In the Hindu traditions, it is thought to be the third eye of Shiva, who grants knowledge of perfect truth and nonduality. The name of this center in Sanskrit is ajna, or “unlimited power.” In this chakra we attain the knowledge that we are inseparable from God, that we are eternal beings inhabiting a temporal body. We express the divine within ourselves, and we see the divine in others. The properties of the sixth chakra are:

A person with an awakened sixth chakra realizes that the authentic self must shed its exclusive identification with bodily or mental experiences. We transcend body and mind, yet welcome both into the field of our awareness. As we begin to observe the mind, we can step into transpersonal states. We follow the mind with curiosity, yet without being absorbed by it. Doubt disappears when we step beyond the mind, and desire and longing cease to be driving forces.

Through the sixth chakra, we enter the realms of knowledge that can be experienced but not told. It is not that these realms lie outside the domain of words, but rather that experience is all there is. Shamans say that this is a realm that cannot be found through seeking, however, only those who seek may find it.

When the sixth chakra is malfunctioning, the individual confuses information with knowledge. He feels he has attained great spiritual truths when all he has is a collection of facts. Spiritual materialism is an endemic dysfunction of the third-eye chakra. These individuals often exercise great power and influence in the world without assuming responsibility for its stewardship. In our media-driven world with its cult of celebrity, the energies of the sixth chakra can become distorted and result in spiritual arrogance and self-aggrandizement.

An awakened third eye allows the shaman to know who he is. It gives him knowledge of the past and future and allows him to envision alternative destinies. Some legends report that those who awaken this chakra can even attain physical immortality. They no longer age or succumb to disease, but rather are able to maintain their youth, vitality and strength. All the desires of one with an awakened third eye come true, and if a number of healers hold the same vision, it comes true for the planet. Native religions have long practiced this tradition. Elders of the Hopi and a similar council of Inka medicine men and women sit in meditation envisioning the kind of world that they want their great-grandchildren to inherit.