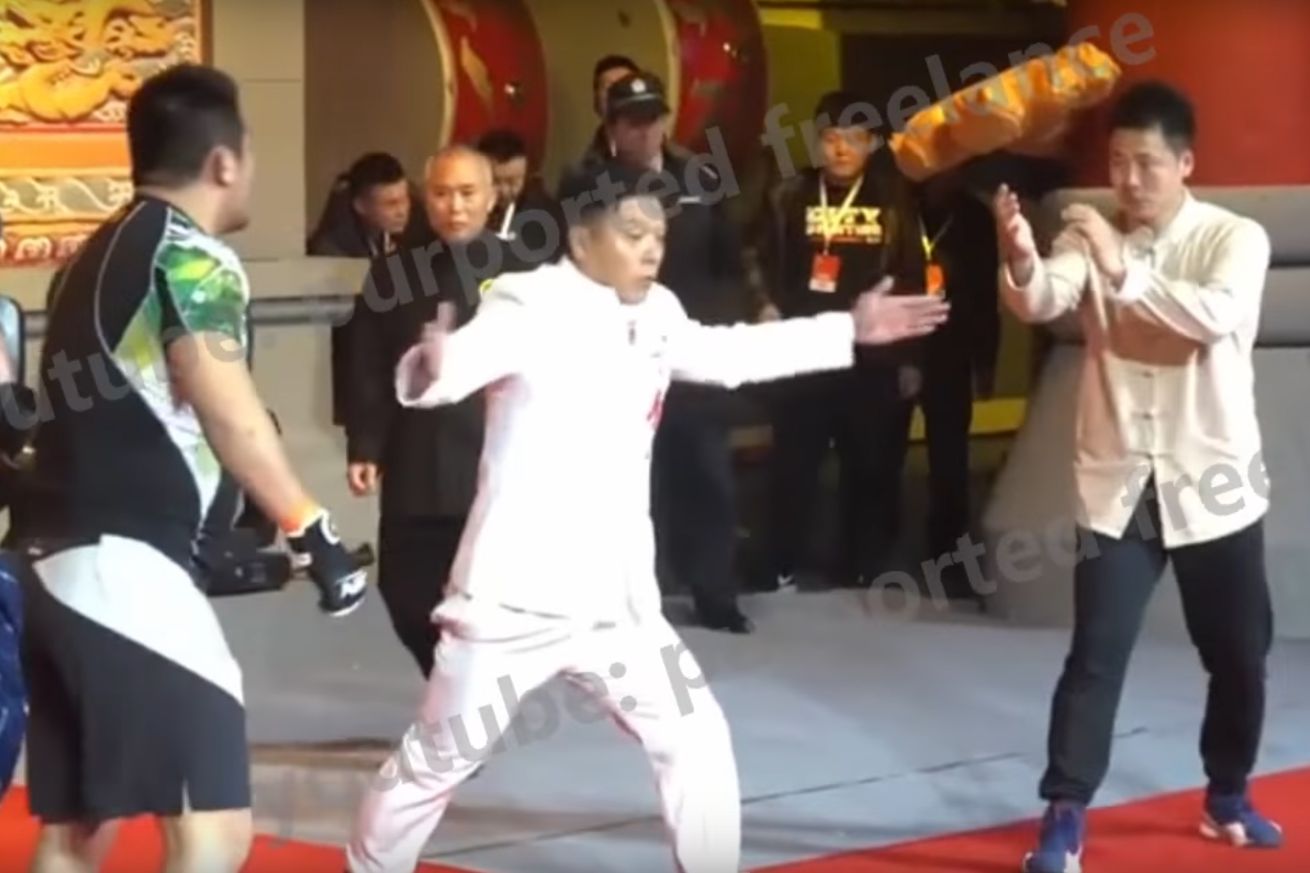 ‘Mad Dog’ Xu Xiaodong is at it again. This time he fought a Wing Chun master in front of a throng of TV cameras.

Check out the video of the contest below, the fight begins at around the 8 minute mark.

In the video Ding, who according to Taiwan Newsclaims to be a 4th generation descendant of Yip Man (Bruce Lee’s legendary master), attacked Xu first with a flurry of seemingly ineffectual strikes. After a few seconds, Xu tossed Ding to the ground with relative ease prompting the snappily-dressed pseudo-referee to impose a break in the action.

When the combatants resumed Xu weathered some more punches before landing counters and another easy throw. The white-clad ref stopped the action again. When it continued Xu landed an overhand right that send Ding to the ground, prompting the referee to dive over top to signal yet another break.

Ding got up and stumbled towards Xu. The MMA fighter then peppered the Wing Chun stylist with punches until Ding crumbled and the ref stepped in again. A man in a white-coat (likely a doctor) then assessed Ding’s condition, while Xu posed for the cameras.

Ding squared up to Xu again, but was punched, kneed, and then thrown head first into a dragon-wrapped column. By this point Ding had a bloody face, but still seemed game to continue fighting. He squared up to Xu one final time and ate a load more punches before the fight was finally called off.

Taiwan News reports that the referee declared the fight a draw.

The match between Xu and Ding was held in front of a throng of TV cameras and officials (including a number of police officers). The event featured a second MMA vs. traditional martial arts fight. In that contest MMA fighter Xiong Cheng Cheng aka ‘One-handed Bear’ (according to ) fought a Wing Chun fighter named Yu Changhua (who also claims Yip Man lineage).

Xiong (who is a dead ringer for boxer and Shaolin Monk cos-player Yi Long) appeared to beat Yu rather easily, despite fighting the entire match with his right hand behind his back.

The clash between Xu and the Wulin began online, with the MMA coach and fighter beefing with traditional martial artists and stating that mixed-martial-arts had supremacy over any other style of fighting. The debate grew more intense and eventually a fight was set-up in Chengdu, Sichuan Province between Xu and a Tai Chi master named Wei Lei.

Xu knocked out Wei in 10 seconds. After his win Xu told the large crowd that Tai Chi, and all other traditional martial arts, were shams. The claims lead to a number of other Tai Chi proponents challenging Xu, but the MMA fighter left the scene without further conflict.

After this Xu took to Chinese social media network Weibo to continue his rant against Chinese martial arts and what he saw as their ineffectiveness. In those posts Xu challenged any martial artist to prove him wrong. Xu also offered a reward of 1.2 million yuan ($174,000) to anyone who could do it.

Xu’s challenge garnered mainstream attention in China. A juice tycoon named Chen Sheng offered an additional 10 million yuan ($1.4 million) to anyone who could beat Xu. A number of Tai Chi stylists told the media they would take on Yu. So did Yi Long and Canadian Wing Chun street fighter Pierre Francois Flores.

However, Xu’s challenge fizzled out. His posts on Weibo discussing the challenge mysteriously disappeared. China’s authoritarian government have a long history of censoring Weibo. China’s traditional martial arts are important tools for both China’s tourism industry and the nation’s international diplomacy.

After this happened Xu, whose personal Weibo page was also taken down, told the BBC that he would be keeping quiet on the internet and begin studying traditional martial arts.

That didn’t seem to last, though. A month later, in June 2017, video emerged of Xu and a group of MMA fighters trying to fight a squad of Tai Chi masters, again in Chengdu. However, the mass brawl was shut down by local police. It has since been rumored that a nephew of one of the Tai Chi stylists called the police to put an end to the spectacle.

Since then Xu has been quiet, despite teasing a release of more footage of fights between him and traditional martial artists.

His re-emergence last week is not a surprise, but the grand stage it took place on is rather shocking.

After being censored by the government and shut down by police, Xu’s latest match seems to be endorsed by some-level of officialdom. The fight versus Ding also appeared to be covered by mainstream media; whereas his previous fights were transmitted only on grainy cell phones. The location for the Ding match was also far more spectacular than the dingy gyms he fought in previously.

Perhaps instead of fighting Xu’s insistence that MMA trumps traditional martial arts, and trying to cover-up any evidence that this is true, China’s rules-makers are happy to be at the forefront of a resurgence of style vs. style fighting; the kind that once launched MMA and ushered in the UFC.